Tuning and validating balancing, SOC and ensuring flawless operation of the BMS are critical for maximizing energy efficiency and score.

This article has been contributed by Calvin DeKoter, Technical Lead of the Waterloo Formula Electric Race Team at the University of Waterloo. 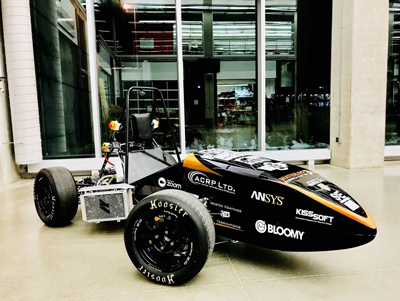 The Waterloo Formula Electric Race Team is moving away from an accumulator (Formula Hybrid term for battery pack) based around LiCoO2 pouch cells to more standard NCA/NMC 18650 cylindrical cells. This greatly simplifies the mechanical design of the accumulator because the type of cylindrical cells we have chosen do not need foam padding, are easier to support, and are of higher quality than our previous cells. The new architecture will have less energy and power output, but our lap time analysis showed that the reduction in the competition score is not significant enough to outweigh the benefits of simplicity and consistency afforded by the new cylindrical cells. In short, the new accumulator architecture trades power and energy density for improved mechanical design, manufacturability, and reliability.

Our research into available 18650 cells pointed us towards two main contenders for the battery pack: Samsung 30Q cells, which have an NCA chemistry, and Sony/Murata VTC4 cells, which have an NMC chemistry. The 30Q cells have better energy density but only moderate continuous discharge capabilities while the VTC4 cells store less energy but can deliver much more power. The VTC4 cells are also cheaper. Our team's vehicle architecture is pointing us towards the 30Q cells because of their higher energy density. The competition voltage limit is 300V, along with a limit on segment voltages and energy. The plan is to arrange 490 of these cells into modules in a 14s7p configuration, then connect five of those modules in series.

The maximum pack voltage in this configuration (70s7p) would be 294V, allowing for a maximum power output of roughly 54 kW at a current of 182 A for a few seconds. Lap time simulations showed that adding more power at a rate of 1600 W per kilogram of weight was not useful beyond 60 kW in both the autocross and acceleration events. The continuous power of the battery pack will be approximately 30 kW, depending on cooling and ambient temperatures. At competition, the durability of the vehicle is tested by a 44 km endurance event. This event is also worth 300 points, forcing teams to design for energy density instead of power output. The acceleration and autocross events are only worth 100 and 200 points, respectively. Therefore, it is important that the battery management system (BMS) balances the pack efficiently and clearly displays how much energy is left to the driver. Increasing the energy stored in the pack, up to the competition limit of 6.75 kWh, is almost directly proportional to the simulated score in the endurance event. Therefore, if a BMS can increase the useable energy in the battery pack by even a few percent, it will be a major advantage to the team.

Last year's BMS system was built around the LTC6811 battery management chip. This chip can measure 12 cells in series and has five inputs for temperature monitoring. Each chip managed one segment and communicated the voltage and temperature data back to the central Battery Management Unit (BMU) over an isoSPI connection. The BMU was built around an STM 32 F7 chip. In addition to managing the balancing and charging processes, this board also controlled two Gigavac contactors and the precharge / discharge circuit. One shortfall of this design is that the balancing current was low: only 0.17 A. Since each parallel group in the previous architecture had a capacity of 25 Ah, it would take a very long time to restore a poorly balanced pack to full health. 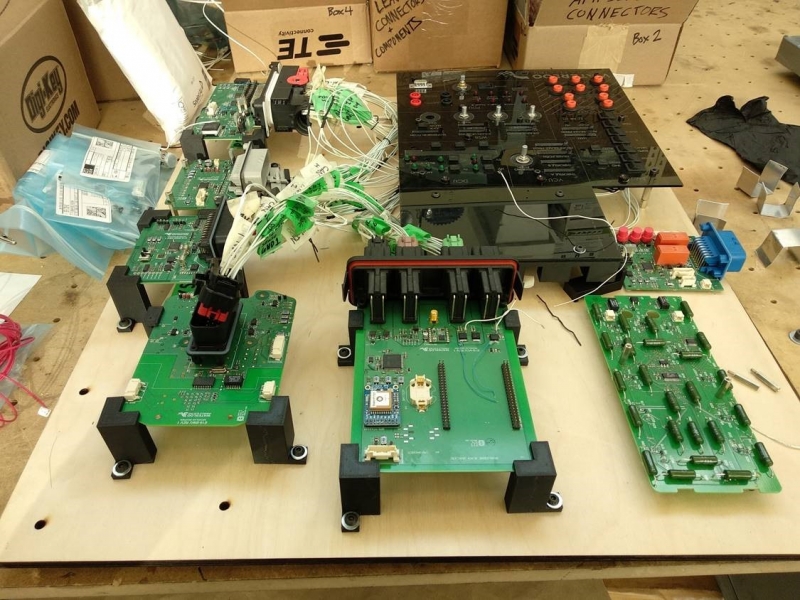 This year, the number of modules in the pack was decreased from 6 to 5, so the number of groups in each module was increased to 14. The LTC6812, a larger version of the current battery management chip, will be used to manage temperature and balancing of each module. Most of the current architecture will be carried forwards but the physical shape will be changed to fit on the larger modules. The size of the balancing resistors will also be increased so that any differences in state of charge across the battery pack can be leveled.

As described above, the performance of the BMS and battery pack have a strong impact on the competition score. By far the most important characteristic is reliability: Most student teams competing in FSAE Electric and Formula Hybrid events in North America are not able to successfully complete the endurance event. If the BMS indicates a critical fault during an event, such as a cell being outside of voltage or temperature limits, or a communication error, it must disable the vehicle until reset by someone outside the car. It is critically important that the BMS system works flawlessly during testing and competition. The more accurately the BMS can assess the state of charge of the battery pack, the more energy the driver can use, and the higher the competition score will be. Therefore, our team is investigating different models of SOC measurements that use both the current voltage of the pack and the total charge that has left the battery pack. 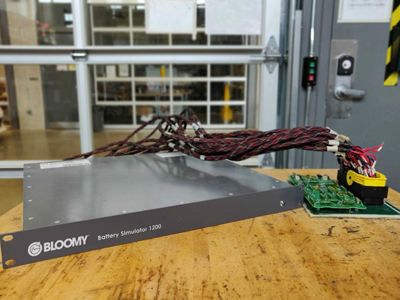 The BLOOMY® Battery Simulator 1200 has been extremely valuable to our team in ensuring the proper function of our battery management system, and in turn, ensuring our vehicle is competitive. The Battery Simulator 1200 allows our team to rapidly develop our battery management system hardware in a safe and efficient way by allowing us to test our cell measurement boards under known conditions and possible edge cases that may occur during vehicle operation. Not only does this save time due to the level of automation permitted, but also allows us to protect our batteries sufficiently by knowing our BMS system is functioning properly. This is extremely valuable for a student design team as we cannot afford to destroy expensive cells due to faulty hardware. The Battery Simulator 1200 also allows for integration in our Hardware-in-the-Loop system for benchtop vehicle simulation. This feature allows us to demonstrate the functionality of our BMS system to the judges at competition, which is a rules requirement, without changing any firmware setpoints or adding additional hardware to our vehicle.