The Battery Simulator 1200 is a commercial, off-the-shelf instrument designed for safe and efficient battery cell simulation under the control of a host PC or automated testing system. Due to the increasing pace of electrification across many industries, our customers are using this instrument in more widely varying test configurations. Since the instrument is isolated to 1,000V, multiple 12-cell units are often connected in series in order to simulate a variety of module, string and pack configurations, as needed for testing battery management systems and other battery electronics. Our new Soft Front Panel and LabVIEW driver versions 3 contain features to enhance the Battery Simulator 1200’s capabilities when using multiple units together at the same time.

The Soft Front Panel has been updated to connect, configure, monitor and control multiple Battery Simulator 1200 units from one host PC or controller, on any combination of CAN and Ethernet interface ports. One 12-cell Battery Simulator 1200 unit’s main control panel is viewable at a time, as selected from a dropdown selector at the top of the panel. The main control panel provides interactive monitoring and control of cell voltages and currents as well as accessory analog and digital inputs and outputs. Formerly, the accessory I/O were only accessible via the driver’s application programming interface (API). You can also change any unit’s communication settings on-the-fly, without cycling its power. This includes the CAN versus Ethernet communications Mode, as well as the Box ID or IP Address, etc.

New functions have been added to the LabVIEW driver VIs to modify the unit’s communication settings programmatically rather than manually. In CAN mode, the driver will automatically construct an XNET database in memory for the Box IDs specified by the user, so databases for multiple configurations no longer need to be managed. In addition, the driver has been thoroughly reworked for more stability during development, eliminating the need for software restarts after aborting code as in earlier versions. 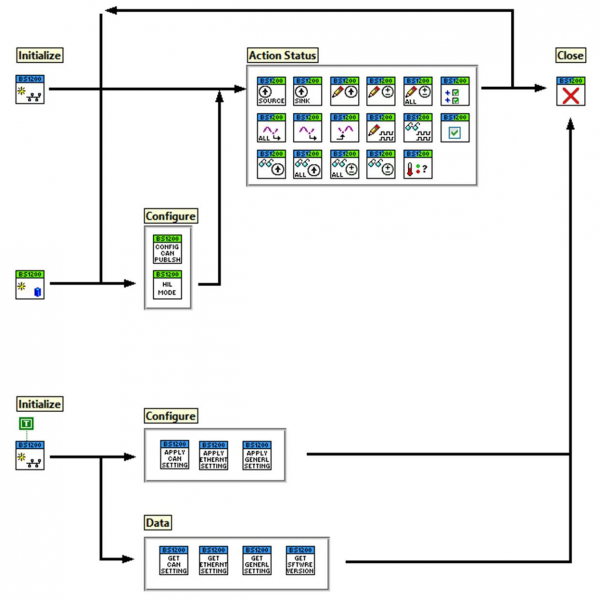 The Soft Front Panel and LabVIEW Driver installers are available for free download for registered users of www.bloomy.com. Version 3 is designed to install alongside earlier versions, so that applications that use earlier versions will continue to function exactly as they did previously. In order to take advantage of the new features of the LabVIEW driver version 3, you must update your applications to utilize the new driver VIs. All versions of the driver remain compatible with the Battery Simulator 1200 firmware.

About the Battery Simulator 1200

The Battery Simulator 1200 provides 12 independently programmable cells that sink and source current for safe and efficient testing of battery management systems (BMS) and other battery electronics. The instrument sets cell voltages quickly, without the delays associated with charging and discharging real cells, and simulates many common faults without the hazards of real batteries. The instrument is isolated to 1,000V channel-to-channel and channel-to-ground, allowing you to connect hundreds of cells in series from multiple Battery Simulator 1200 units. The unit is FCC and CE certified and used by battery electrification companies around the world. Indeed, the Battery Simulator 1200 is the fundamental building block of many turnkey test systems, including Bloomy’s own BMS HIL Test System, BMS Validation System, and BMS Manufacturing Test System.