A Sneak Peek at EFT for TestStand Version 2.2

EFT version 2.2 is coming soon with loads of new features to further increase productivity and reduce test development time. While there are dozens of new features and improvements to the EFT Module for TestStand, let’s take a look at five of the most exciting updates.

This has been by far our most requested feature. The ability to embed VI subpanels from a TestStand sequence into the EFT Manufacturing OI makes for a seamless, intuitive operator experience. Rather than using modal dialogs to interact with the operator, you can now embed the front panel of most VIs running in TestStand into the operator interface. This is great for tasks like serial number entry, setup confirmation, or displaying waveforms in real time. Embedding subpanels is quick and easy from the TestStand sequence editor. Simply drop in the

step type just before the VI to embed, set the VI to execute in the run-time engine, and ensure the VI’s front panel is set to show when called. You can even configure the VI to either run on the side of the OI execution, or as a full screen – covering the entire trace execution. Want to run these VIs outside of the EFT OI? Not a problem, if the EFT OI is not there to embed the VI, it will automatically be displayed as a dialog box. 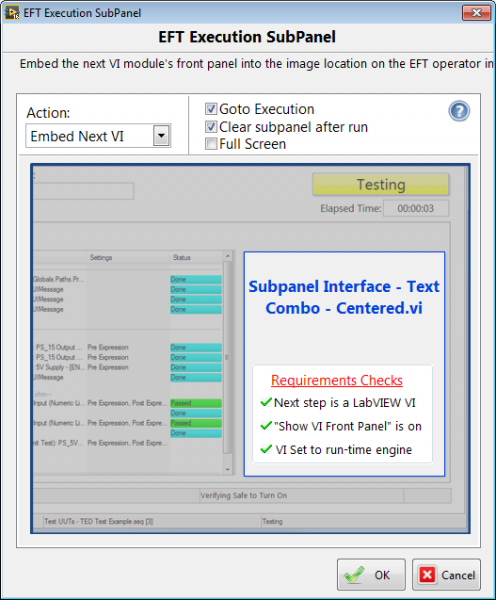 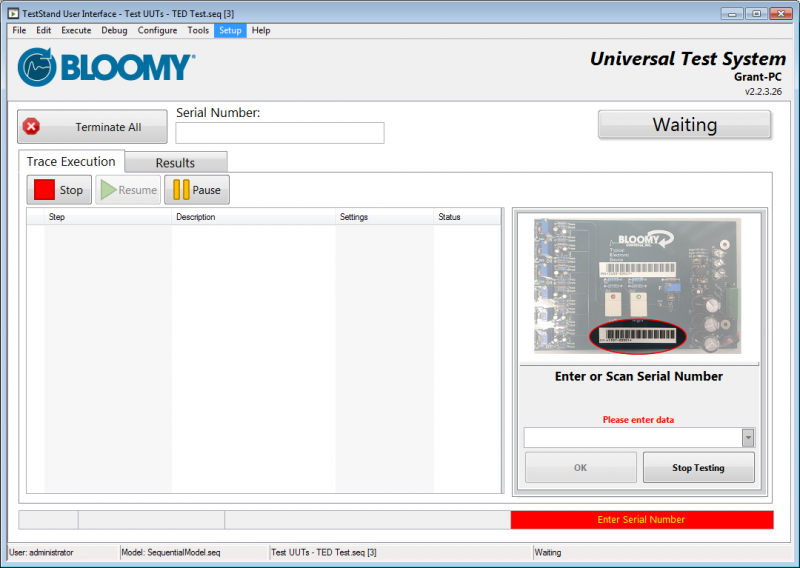 In addition to the subpanel step type, now all EFT OI Interface functions, like progress percent and text, OI Images, and execution messages, can be defined using new EFT OI Interface StepTypes. Simply drop down the desired OI Interface, click the configure button and quickly set up run-time feedback to your operators. The step types even provide a preview of how they will look in the EFT Manufacturing OI.

The Linked File Manager allows you to specify relative paths to any external HAF configuration files you’d like to link to.

Linked abstractions (Instruments, Signals, Connections, etc) show up in the configuration file in blue italics so you know that they are defined in another file. They can’t be edited here (that defeats the purpose of the link), but you can disable them as needed.

In addition to the ‘Flat File’ view in the EFT DB Report Generator where each row contains a UUT Test, the EFT DB Report Generator can now generate a Single UUT Report which shows more detail about each test result in a sequence. Getting to the report is easy, just query results using the flat file view, then select the desired test run and choose ‘Single UUT Report.’ Just like the Flat File view, these reports can be exported to an external file. In addition to the old CSV format, you can also now export your reports from any tab to tab delimited text files. 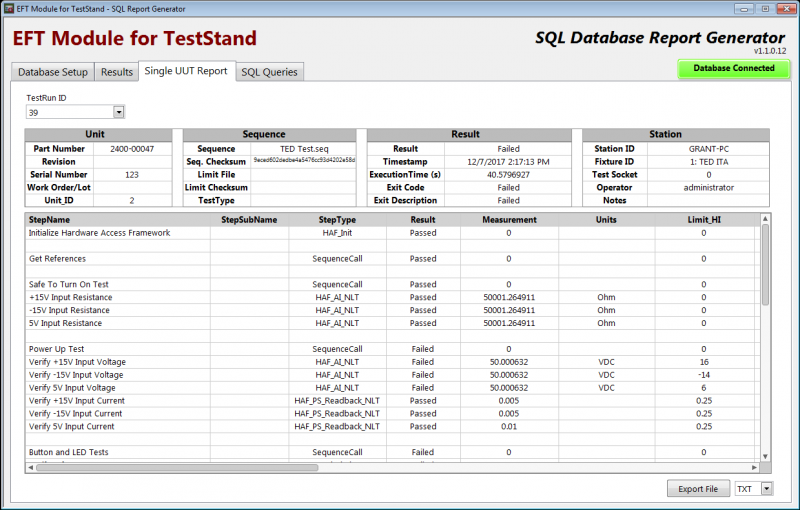 The HAF Manager started out as a tool for defining your HAF configuration files, then we added the ability to manually interact with your HAF-defined instrumentation by providing the ‘Execution Mode’, a soft panel interface for controlling instruments, signals, connections, and communications. We’ve now extended the power of the Execution Mode by allowing you to run it in parallel with your TestStand Sequence. Once your test sequence is running, simply launch the HAF Manager from the TestStand Tools menu to open it up in the current TestStand application instance. You’ll now be able to see the last values for all measurements as your sequence executes. You can even pause the sequence, interact with your hardware using the HAF Manager in the exact state that TestStand left it in, then resume TestStand when you’re done. This gives engineers and technicians much more control of the system during sequence execution, which can drastically reduce debug and diagnostic time. 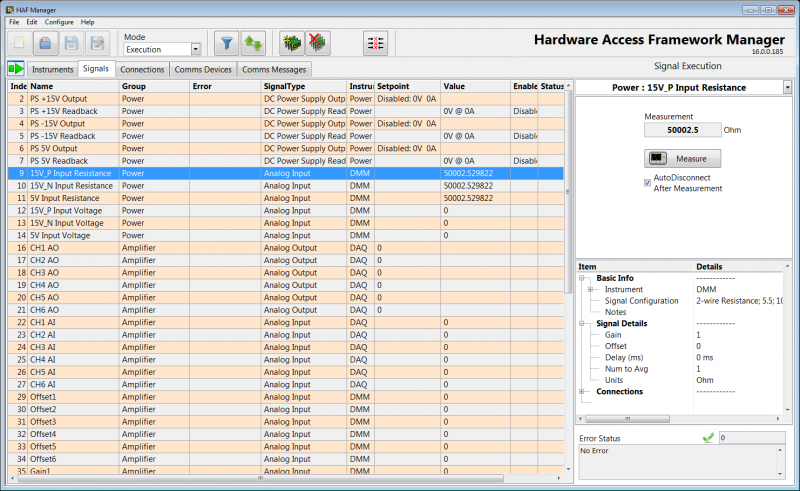 In addition to the soft panel, you can now more easily dive into the HAF StepType and plugin driver VIs. From the HAF Manager, choose Help > HAF Libraries, and you’ll see a list of all installed HAF libraries. Double click on any library to open it up in the TestStand application instance, allowing you to set breakpoints and probe wires in order to more deeply debug your test software. 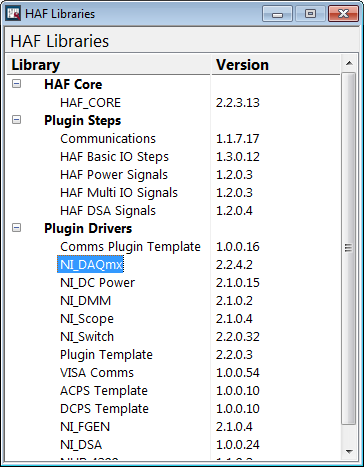 Finally, we’re excited to announce two new HAF StepTypes to help you interact with drivers at a more advanced level: Get Reference, and Custom Instrument Action.

function does exactly what it says. When you use this StepType, you point it to the Alias of the desired instrument, then define the variable where you’d like to store the reference. References can be retrieved as LabVIEW IO Controls (VISA, PXI instruments, etc), Numbers, Strings, and even activeX or .net objects. Once you have the instrument reference, you are free to write any VI you’d like to configure or control the instrument. 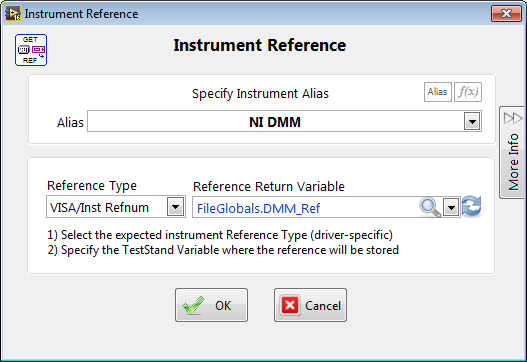 allows you to call any HAF Interface Function inside the driver specified by the Instrument Alias. Once a function is selected, the configuration dialog displays all front panel controls and indicators. The developer can then directly set any controls and specify the variables where indicators can be stored. While this technically breaks the full hardware abstraction of the Hardware Access Framework, it allows advanced developers to take advantage of functions that are specific to a particular device that would otherwise be off limits. 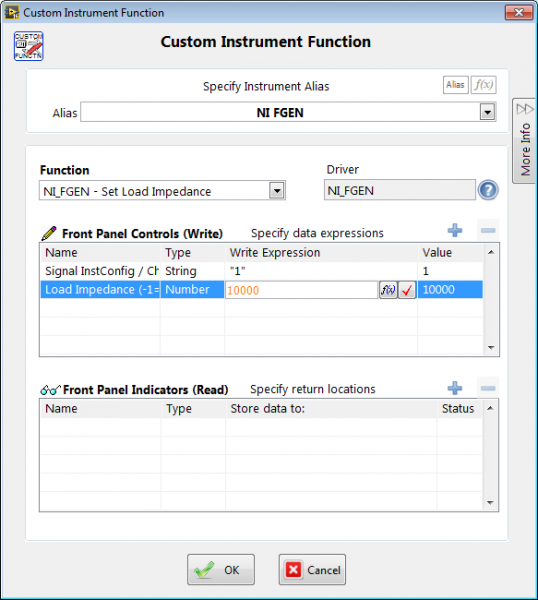