Data is transmitted in Manchester encoded words consisting of a 3-bit sync, 16 data bits, and an odd parity bit. MIL-STD-1553B is a 1 megabit bus, so a single word takes 20 µs. Sync and parity bits are not typically exposed to higher-level drivers, though they may sometimes be manipulated for fault injection.

An entity on a MIL-STD-1553B network is classified as a Bus Controller (BC), Remote Terminal (RT), or Bus Monitor (BM). These are described below:

In a transmit message, the Bus Controller will send out a command word addressing the RT and subaddress to request data. The RT will respond with a status word, followed by 1 to 32 data words.

In a receive message exchange, the Bus Controller will send out a command word addressing the RT and subaddress to receive data, followed by 1 to 32 data words. The RT will respond with a status word.

The command word transmitted by the Bus Controller addresses a message to a specific Remote Terminal and subaddress and identifies the type of message (transmit/receive) and number of data words to expect.

The RT status word identifies the responding Remote Terminal to the Bus Controller and carries a number of flags indicating the RT’s current condition.

In addition to the standard transmit and receive messages, there are a number of special use message types. 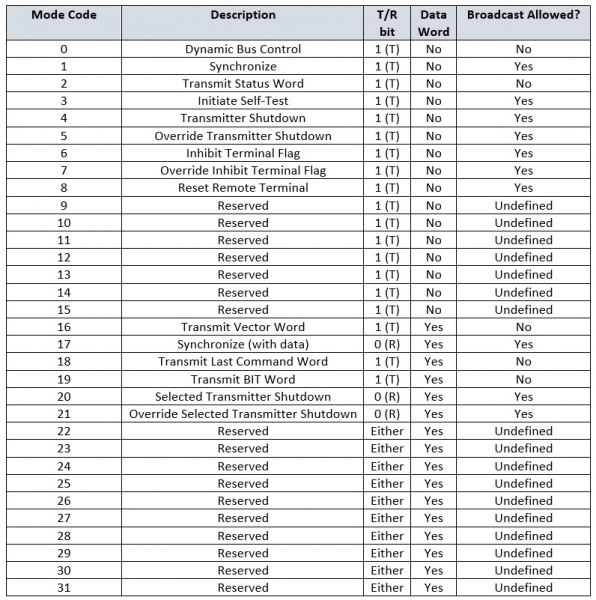 The fastest message (Message A) needs to go at 20 Hz (or a period of 50 ms), so this will dictate the minor frame rate. The resulting major frame will look like this:

In addition to scheduled messages, a Bus Controller can also send aperiodic messages. These come in two flavors: